The Art of canvas stretching is just another Service that we provide. Simply tell us you have read this blog for a discount on your next canvas job.

Canvas has become the most common support medium foroil painting, replacingwooden panels. It was used from the 14th century in Italy, but only rarely. One of the earliest surviving oils on canvas is a FrenchMadonna with angelsfrom around 1410 in theGemldegalerie, Berlin. Its use inSaint George and the DragonbyPaolo Uccelloin about 1470,andSandro Botticelli‘sBirth of Venusin the 1480s was still unusual for the period. Large paintings for country houses were apparently more likely to be on canvas, and are perhaps less likely to have survived. It was a good deal cheaper than a panel painting, and may sometime indicate a painting regarded as less important. In the Uccello, the armour does not use silver leaf, as other of his paintings do (and the colour therefore remains undegraded).Another common category of paintings on lighter cloth such aslinenwas indistemperor glue, often used for banners to be carried in processsion. This is a less durable medium, and surviving examples such asDirk Bouts‘Entombment, in distemper on linen (1450s,National Gallery) are rare, and often rather faded in appearance.

Panel painting remained more common until the 16th century inItalyand the 17th century in Northern Europe.Mantegnaand Venetian artists were among those leading the change; Venetian sail canvas was readily available and regarded as the best quality. 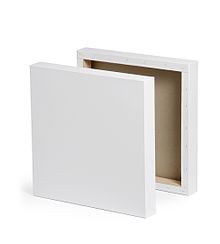 Canvas is typically stretched across a wooden frame called astretcherand may be coated withgessobefore it is to be used; this is to prevent oil paint from coming into direct contact with the canvas fibres, which will eventually cause the canvas to decay. A traditional and flexible chalk gesso is composed of lead carbonate and linseed oil, applied over a rabbit skin glue ground; a variation using titanium white pigment and calcium carbonate is rather brittle and susceptible to cracking. Aslead-based paintis poisonous, care has to be taken in using it. Various alternative and more flexible canvas primers are commercially available, the most popular being a synthetic latex paint composed of titanium dioxide and calcium carbonate, bound with a thermo-plastic emulsion. Many artists have painted onto unprimed canvas, such asJackson Pollock,[6]Kenneth Noland,Francis Bacon,Helen Frankenthaler,Dan Christensen,Larry Zox,Ronnie Landfield,Color Fieldpainters,Lyrical Abstractionistsand others. Staining acrylic paint into the fabric of cotton duck canvas was more benign and less damaging to the fabric of the canvas than the use of oil paint. In 1970 artistHelen Frankenthalercommented about her use of staining: